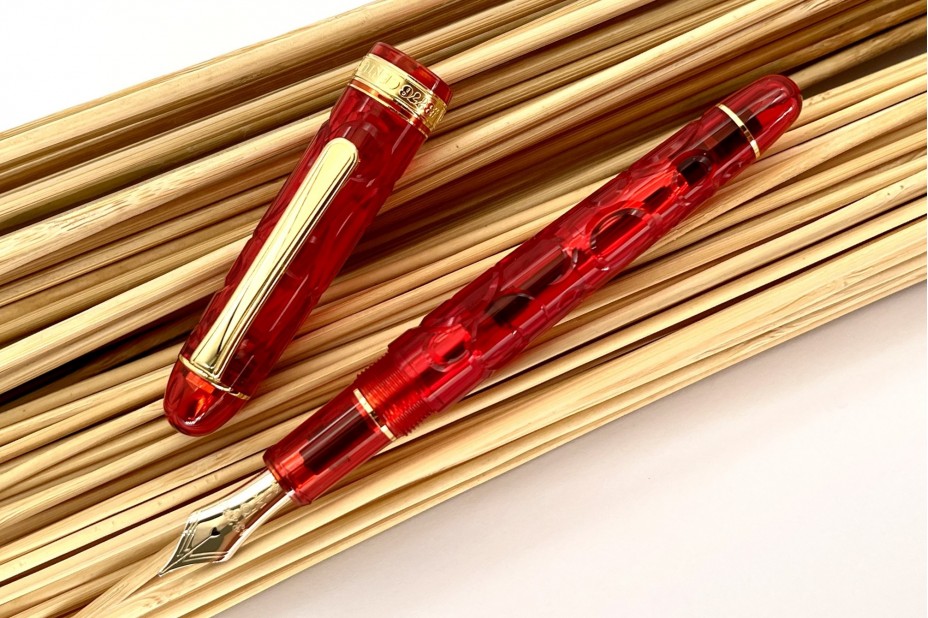 With Platinum's latest technology and innovative cap design, the "Slip & Seal" mechanism in the #3776 Century model prevents the ink from drying out for up to 24 months. This translucent red fountain pen is accented by gold trim.

The fifth and final edition of Platinum's Fuji Shunkei series is the #3776 Century Kinshu. This last fountain pen is inspired by the seasonal scenery woven by Mount Fuji and the first in the series to have a golden finish.
Kinshu is a beautiful autumn in which the trees turn red and look like Nishiki, a high-class woven fabric in which patterns are woven with various colored threads such as gold and silver. "Kinshu" expresses the scene of the heyday of autumn burning with autumn leaves.
In order to express the fiery autumn leaves, the pattern is covered with flames, and the entire body is mirror-cut. The body is also a scarlet (fire) color that resembles a flame, and by overlapping, it creates shades of autumn leaves.
In addition, the body cut with many small curves reflects finely and intricately, and together with the gold ring, gives off a glittering shine as if gold thread and silver thread were woven.

The pen comes with a blue-black Platinum cartridge as well as a silver-colored Platinum converter for use with bottled ink, and features a 14kt yellow gold nib.

The Platinum #3776 Century Kinshu Fountain pen is limited to only 4000 pieces worldwide. The limited edition number is engraved on each pen.